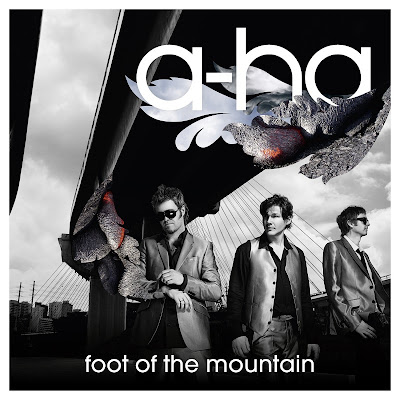 As a long-time A-Ha fan, I have been waiting anxiously for this new release. At first listen, the single struck me as very familiar. In two seconds I had it. This is a remake of one of my favorite Magne F. songs. Those keeping up with Magne F. (Furuholmen) will recognize the music and verses of Magne's song "The Longest Night" off of his most recent work A Dot of Black in the Blue of Your Bliss. Several A-Ha songs actually have lived first-lives as solo works of Magne's, Morten's or Paul's, then brought to the table of A-Ha, refined and immortalized.

I have been so used to hearing Magne's version that the new chorus ("We could live by the foot of the mountain...") stuck me very odd at first. The new A-Ha lyrics are as fitting as the original lyrics Magne wrote and add a new chapter to an already timeless story. Morton Harket's vocals are so haunting yet somehow comforting. His skill and the passion for what he does is unmistakable. A-Ha's version has that trademark loneliness-looking-for-hope sound that I find myself drawn to so strongly as if called to another land.

Musically, A-Ha's "Foot of the Mountain" is nearly identical to Magne's "The Longest Night", but the production is ramped up quite a bit. There is a clear separation of each instrument, acoustic guitar, bass, drums, keys and strings all in perfect place. There is also something of a Gregorian chant-esque backing vocal hovering in the background that adds a depth of darkness to the hopeful lyric. Interestingly, there is an obvious edit skip on "Foot of the Mountain" at around 2:47 perhaps foretelling of an extended version out there somewhere.

Unfortunately, as with their previous three major releases, Minor Earth/Major Sky, Lifelines and Analogue, there are no plans for a U.S. release although there has been some talk about it. Fans will be forced to dig the interwebs for mp3's, suffer the price gouging of an import CD or perhaps if we are lucky enough, get access to part of the CD on iTunes. As the band that many great, well-known groups like ColdPlay and U2 derive their inspiration from, A-Ha certainly deserves some play (and distribution) here in the states.

I am certainly looking forward to the full Foot of the Mountain release as well as the highly anticipated Apparatjik full offering on it's way.

You can hear the new single "Foot of the Mountain" in it's entirety on Universal Music's Norwegian site.
Be sure to look for "Shadowside" and "Riding the Crest" as well as they are brilliant songs.
A-Ha is currently playing select shows.

By MaudFisher -  09 Feb 2021, 12:56
-  09 Feb 2021, 12:56 #2820726
I think that education is a very important thing for each of us. Many of us graduate from school, college, university. Each of us learns something new for ourselves and receives knowledge need help writing a paper. I would also like to give you a piece of knowledge and recommend a great site where you would find many essays on various topics. I think it will be interesting to you, and you will get a piece of new knowledge.

By patricialambert -  25 Maj 2021, 09:10
-  25 Maj 2021, 09:10 #2821009
Hello everybody! Thanks for sharing this type of interesting information. I have bookmarked it to read again. When you order an essay on the web, you hope to get the substance of top quality right on time, yet you likely would prefer not to spend your month-to-month spending plan on it. If you need math problem writing help from perfect essay writers, please visit our web - it is a good opportunity to find out new information and do your task faster and more quality.

We have created lots of YouTube videos just so you can achieve [...]

The best flat phpBB theme around. Period. Fine craftmanship and [...]

All you need is right here. Content tag, SEO, listing, Pizza and spaghetti [...]

this should be fantastic. but what about links,images, bbcodes etc etc? [...]

Swap-in out addons, use only what you really need!

Why Would you Settle for Less when you can have More? Do not let other Authors Fool you with Empty Marketing Keywords. FLATBOOTS is what you Deserve. Built to last, Built from Scratch, Nothing Less.